Next month's BBKA News arrived this morning.  On the front is a photo of five of my bees having a gossip while waiting for their new queen to return from a mating flight. 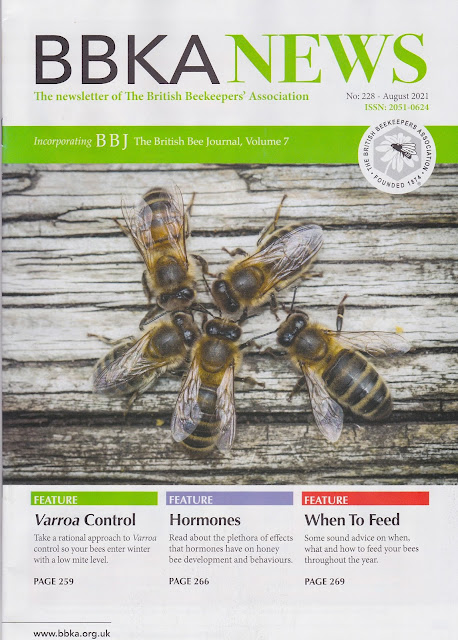 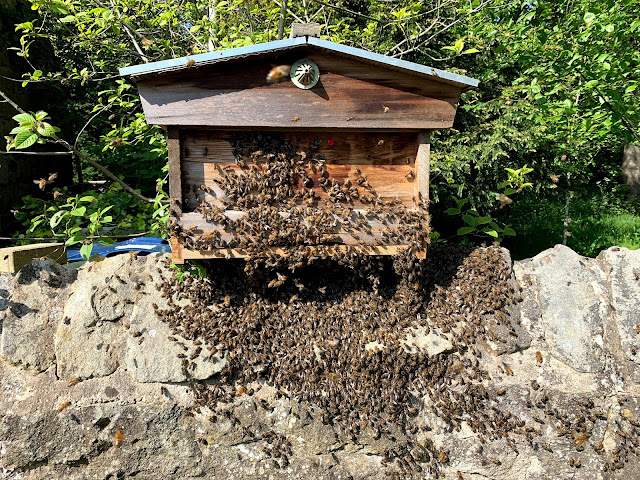 I had been expecting a swarm because there had been lots of scout bees around my bait hive but I didn't know when it would arrive or where it was coming from.  I have had a few swarms of my own after the very cold weather in most of May followed by sudden warmth at the end of the month and I suspected it would be from one of my hives.  I also heard news of a swarm in a tree not far away on the other side of the golf course. 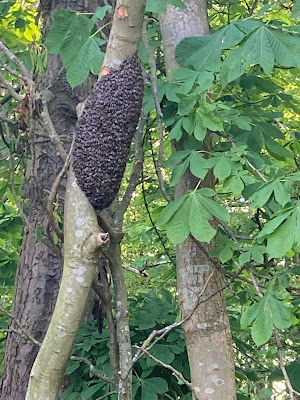 In the end the swarm's arrival was very sudden so I didn't see from which direction it came.  I had walked past the bait hive a minute before with no sign of bees and when I returned there were thousands and thousands of bees in the air.  Almost immediately they started filing into the box.

In retrospect the bait hive wasn't well situated as it was on top of a wall with quite an overhang.  Many of the bees landed on the side of the wall and walked up towards the hive entrance.

Such was their weight as they climbed up over each other that great clumps of them broke off and fell into the grass so they had to start all over again.

It was fascinating to see how they formed chains so that the others could climb up to the entrance. 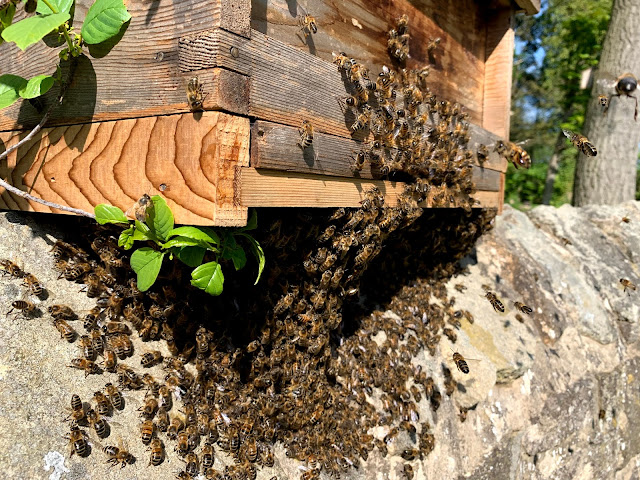 It was also interesting to see quite a few drones and some workers with pollen, all swept along in the excitement. I can tell from their colour these were not my bees and I hadn't lost a swarm that morning so I think this may have been the swarm from the golf course. 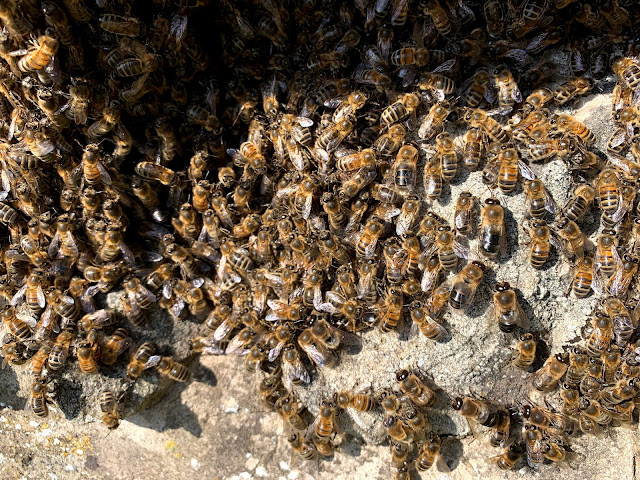 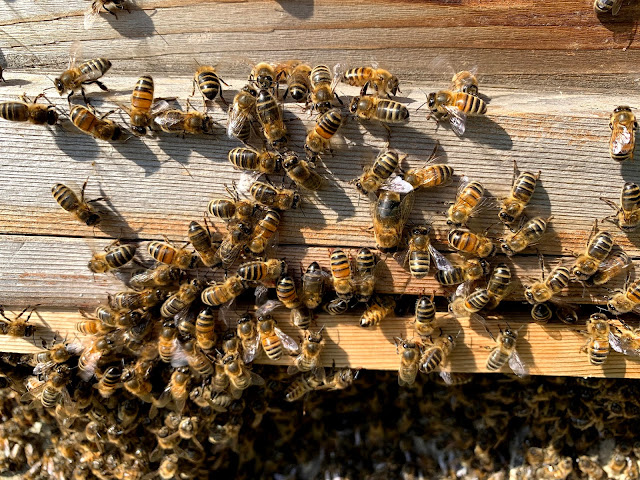 This was the scene 25 minutes after they arrived, with some still under the overhang but nearly all inside the box.

By the following morning the bees were safely installed on a friend's allotment in Jesmond.  I hope they turn out to be well behaved.

A mating flight (I think)

Glancing out of the window this morning I saw a lot of bees in the air.  At first I thought this was another swarm but it was coming from hive 4, which shouldn't be able to swarm as it was reduced to one sealed queen cell 10 days before.  I went over to watch and there were thousands of bees in the air - and on the hive roofs and nearby raspberry canes and cane supports. 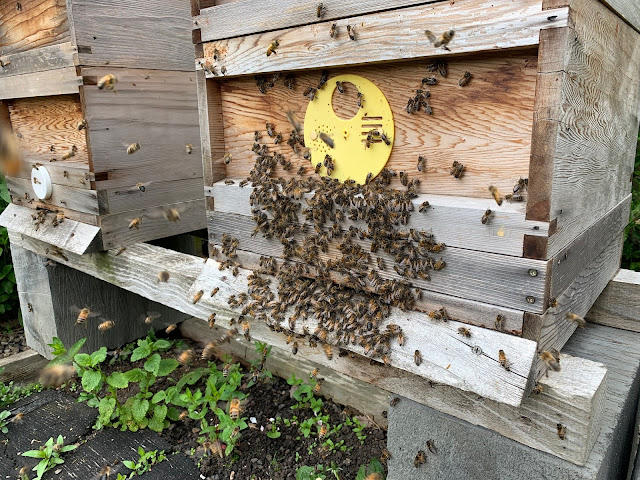 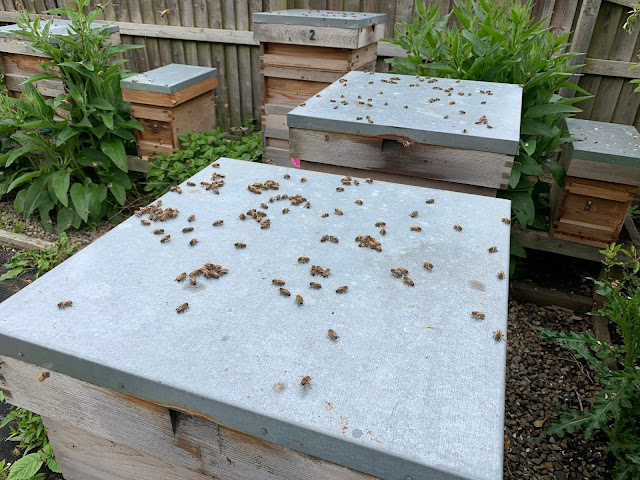 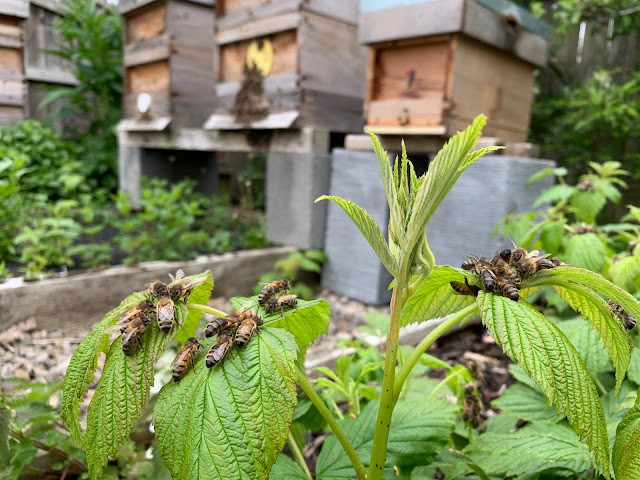 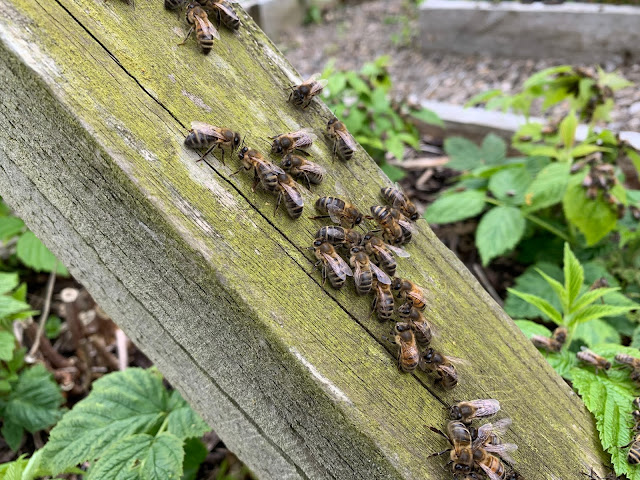 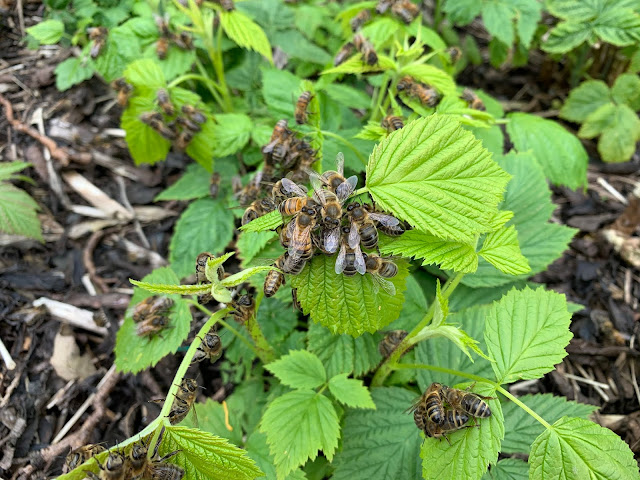 Most of the bees were just sitting around while others flew about excitedly but there was no sign of them coalescing, as in a swarm.  There were a lot on the front of the hive and a clump under the landing board. 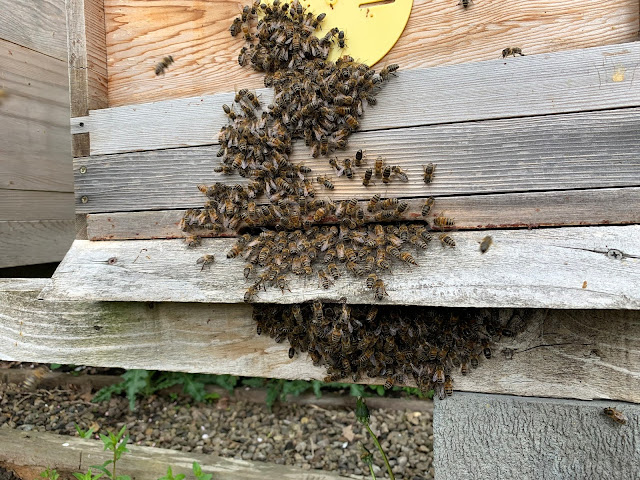 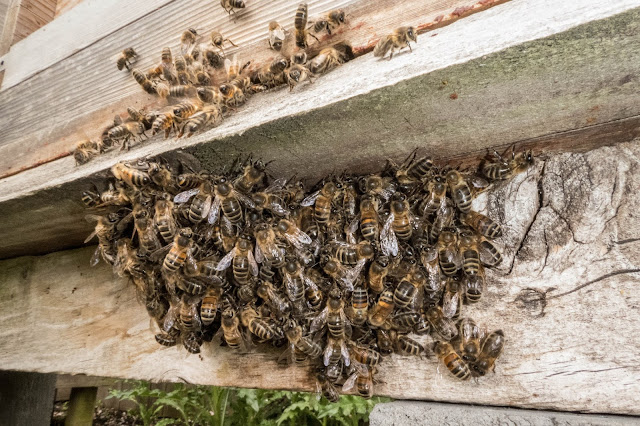 I guessed this was a mating flight but wasn't sure what stage it was at - whether this was the virgin queen leaving or returning.  I watched for about an hour, hoping I might see the queen return.  As I did so the fanning slowly subsided and the number of bees gradually diminished as they moved back inside. 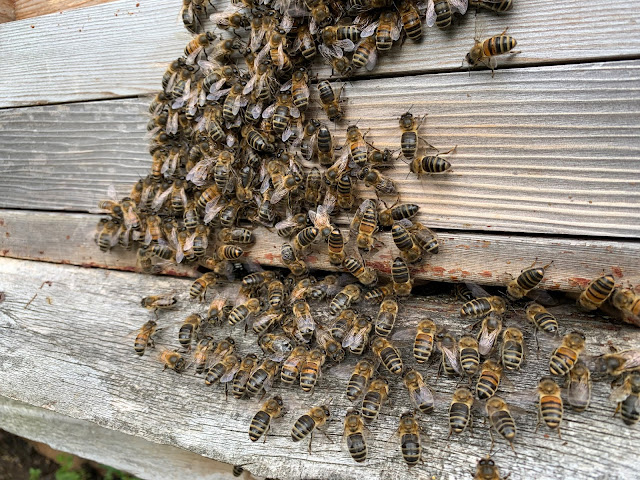 It was cool (11℃), grey and breezy, perhaps not the best weather for a mating flight, but it has been worse recently.  I read since that mating flights last for between 5 and 30 minutes so my guess is that the queen was probably already back in the hive by the time I got there.  I'll wait another two or three weeks before checking that she is laying well.

I had a swarm this afternoon.  I am still not sure where it came from but probably the crazy hive 4 I wrote about last time - where four days ago I found several frames of eggs but no obvious queen, a newly opened queen cell and several sealed queen cells, a combination I still haven't worked out.
Unusually this swarm landed on my side of the fence, in my blackcurrant bush (they usually prefer my neighbour's garden)   I noticed more bees than I would expect flying round the blackcurrant flowers and when I went to investigate I found this. 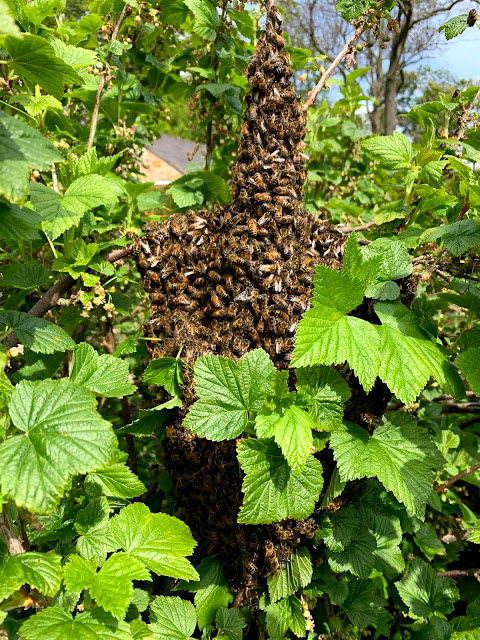 I watched for a while as I have two bait hives set up - one about 2m away and one about 20m away.  When I checked there were only a few scouts investigating each.  It was very hard to tell but I thought that most of the scouts from the swarm were flying over the fence rather than to the bait hives.  I had been hoping to video the swarm taking off and then landing on the bait hive but in the end my nerve failed and I put them in a nuc.  Here they are with three frames of foundation added. 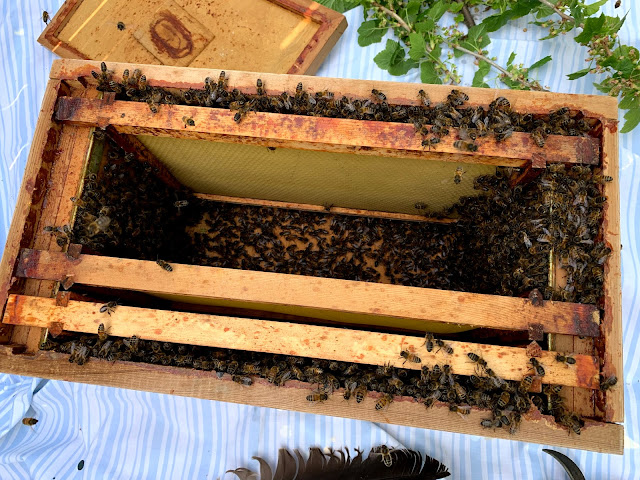 When I was cutting them out of the blackcurrant bush one chunk of the swarm fell but it landed on a rhubarb leaf so it was easy to pick them up and move them to the hive.  They immediately started walking in so I was confident the queen was inside.
While I was watching the swarm I could see several bees carrying pollen - obviously returning foragers caught up in the excitement - but no drones.  Once almost all the bees were in the nuc I did see a few drones amongst the small number of bees left in the bush. 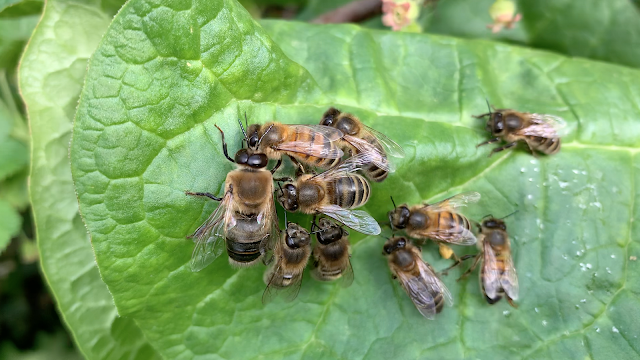 Here are the bees fanning around the entrance, encouraging the stragglers to go in. 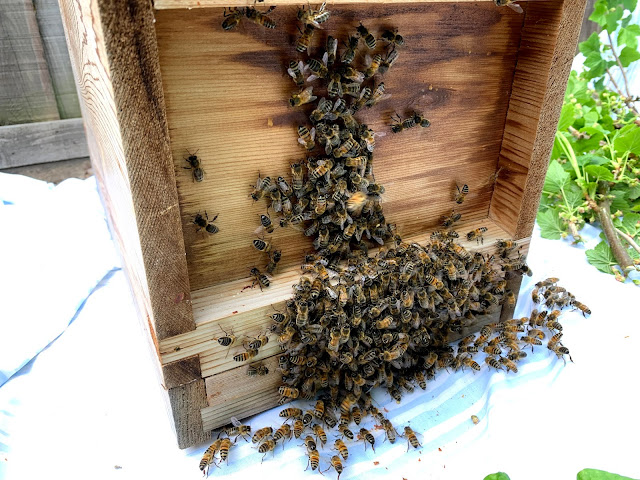 Tonight I have moved the nuc onto a stand, only a couple of metres from where they started.  I put on a feeder and I expect them to build up quickly.  In a few days I'll have a look in and see if I recognise the queen.
Posted by trogtrogblog at 21:19 No comments:

The recent cold weather has made it difficult to keep track of what my bees are up to.  I last looked in on them 22 days ago and even then it wasn't really warm enough.  Knowing that the forecast was for low temperatures I at least made sure they had a bit of room to grow.
Two days ago was the first time we have seen double figures (℃) for a while but it was grey and windy and I was wearing two fleeces so an inspection didn't seem fair.  Instead I set up a bait hive on top of the compost bin.  By yesterday it was already attracting a lot of interest from scouts, flying all around and going in and out to measure it up. 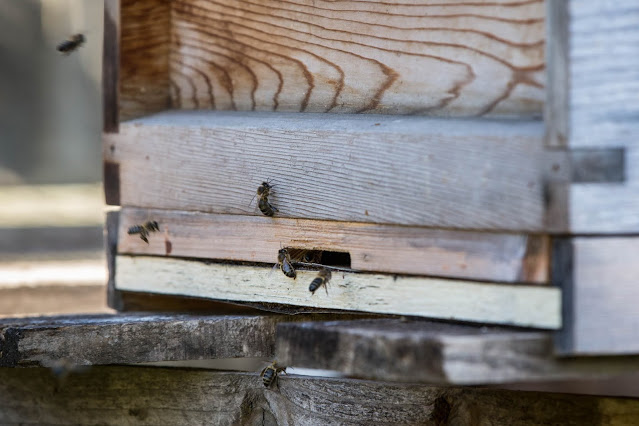 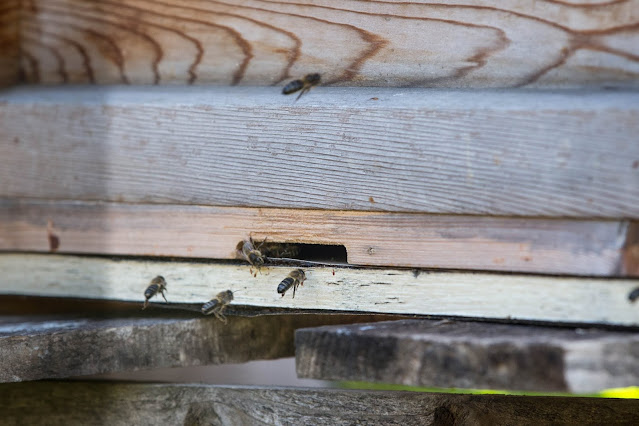 I had hoped to inspect the bees yesterday but we had torrential thundery showers all afternoon so it wasn't possible.  First thing this morning there were even more scouts so I assumed a swarm was imminent.
While I was putting foundation into frames there were lots of scouts investigating what I was up to so I set up another bait hive nearby and it was immediately busy with bees.
Time for an inspection.  Hive 1 has my best behaved bees, unfashionably stripy but very well-behaved.   I had given them a second brood three weeks ago so I didn't expect them to be planning to swarm and they weren't - everything looked fine.
Hive 2 was the one I expected to be most likely to swarm.  It was booming last time, already on double brood, so I had given it a super.  When I looked in the top box the first thing I saw was a sealed queen cell.  I feared the worst but two frames later there was the queen.  I put her straight into a nuc with two frames of brood, one of stores, three of foundation and a feeder.  My plan is to unite them with the killers in hive 3 as a way of re-queening.  I will go back to the main hive in five days to reduce the queen cells to one.
At this stage I was feeling pleased so I skipped the nasty bees in 3 and moved on to hive 4.  This was the smallest colony three weeks ago but was spread out over a double brood box - with a young 2020 queen, lots of space, lots of stores and 5 frames of brood - what could possibly go wrong?  Looking in the top box I found half a dozen sealed queen cells and one which looked as though it had recently been opened (from the inside). 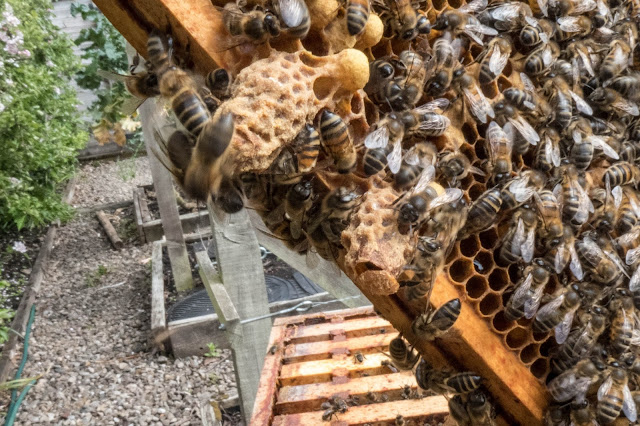 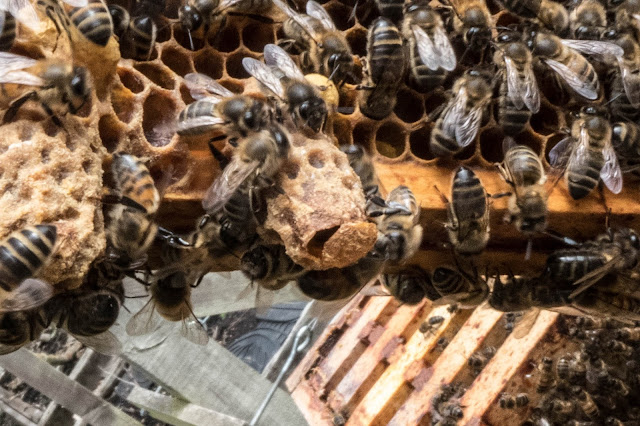 To my surprise there were also lots of eggs but I didn't see the (marked) queen.  At one stage I thought I could hear a squeaking queen but with the sparrows in the box just above, the mowers on the golf course and all the traffic from the road I couldn't be sure and by the time I was ready to record it on the phone I couldn't hear it again.
I can't make this out.  I presume this hive has swarmed in the last day or two, perhaps before or in between the downpours yesterday.  But why is there a newly opened queen cell, suggesting a newly emerged queen? The timing doesn't make sense.  If the queen had been cooped up for days waiting for better weather to swarm surely she wouldn't have carried on laying.  Not being certain if there is a virgin queen I have left two queen cells for the moment, hoping that if a cast emerges it will enter one of the bait hives.  It is interesting that the number of scouts at each is much less than this morning, suggesting that it was hive 2 that was about to go.
I left the killers in hive 3 to last.  They were as badly behaved as ever but the one colony I would be pleased to see the back of shows no sign of swarming.  Just my luck.
Posted by trogtrogblog at 18:00 No comments:

Another of my bees is on the front of this month's BBKA News. 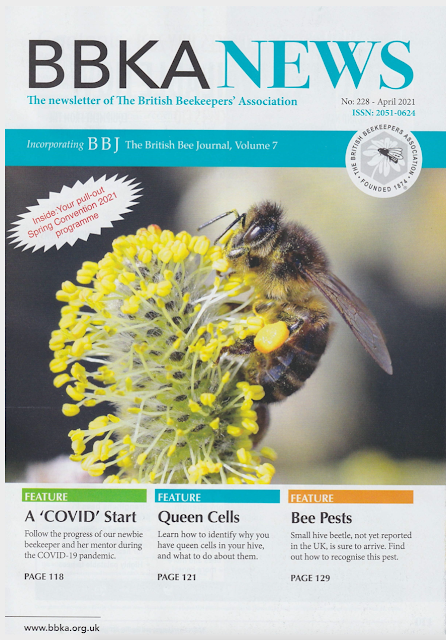 The end of lockdown

After months of cold, rain, ice and snow the bees were released from lockdown today and were out in their thousands.  Although we are officially still in winter it felt like spring and there were hundreds of bees on the snowdrops.  All four of my hives were very busy, suggesting they have come through the winter in good condition.  It will be weeks before I can check on them but it was a delight to see bees all over the garden. 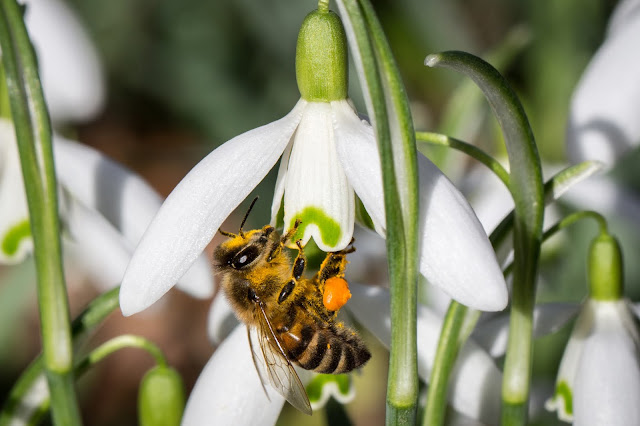 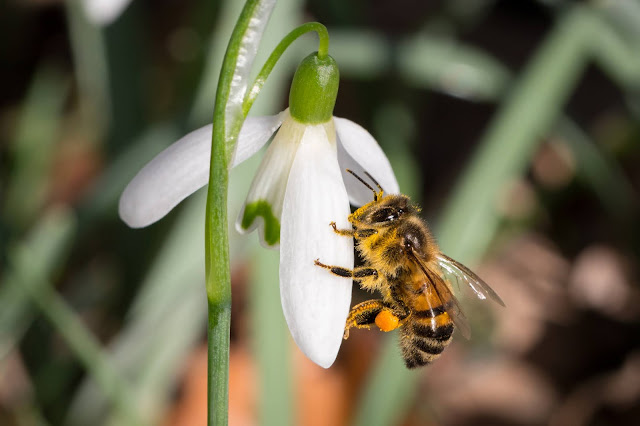 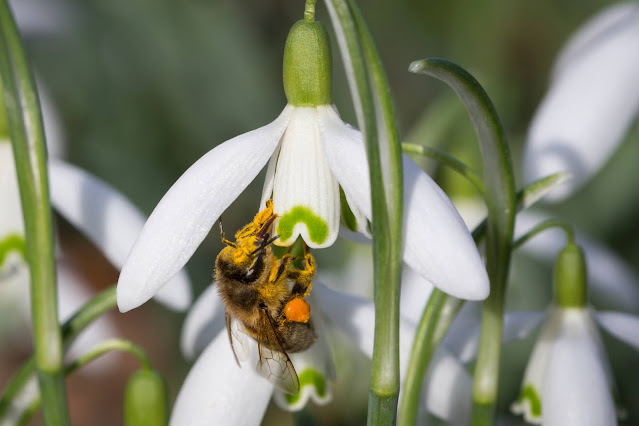 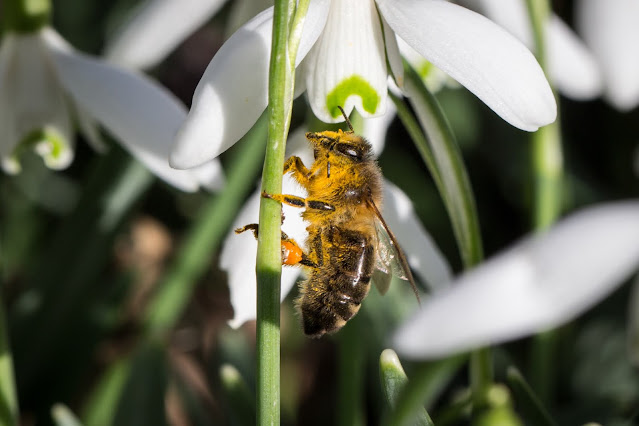 The bees get covered in pollen and spend a lot of time grooming to pack it into their pollen baskets.  Here you can see the pollen brush on the inside of each basitarsus on the back legs and the partly filled corbiculae on the outside of each tibia. 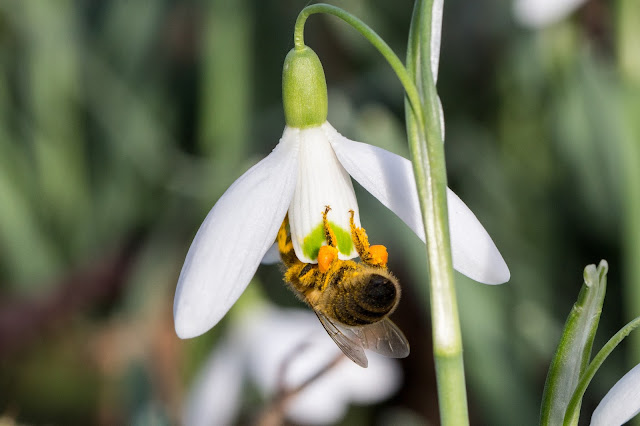 The bee rubs the brushes together as part of the process of moving the pollen into the corbiculae. 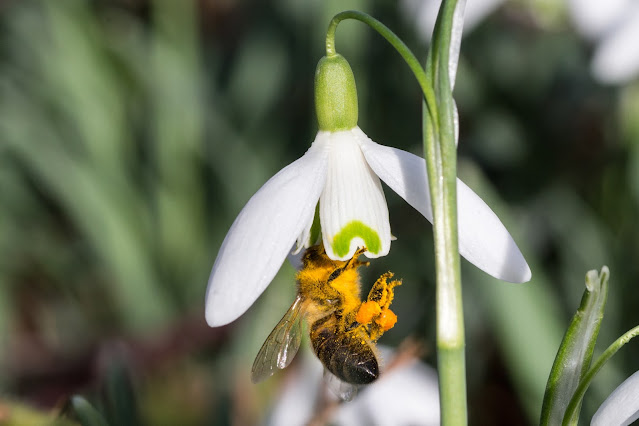 All this happens while the bee is hanging from the flower by its toenails (not a technical term!). 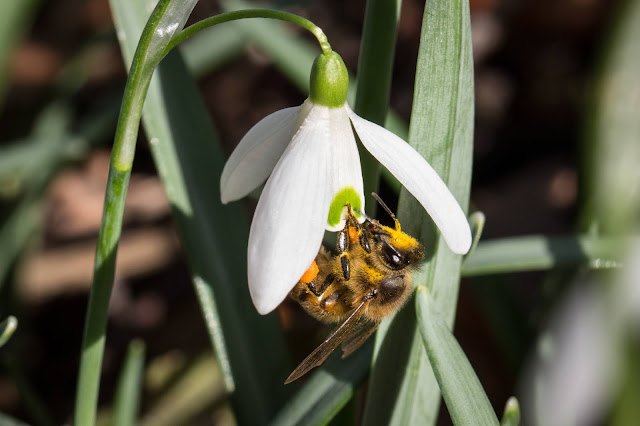